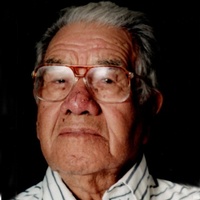 Max G. Rivera, age 103, of Santa Rosa, NM passed away peacefully surrounded by his loving family at his home on Wednesday, August 15, 2018. Max was born on September 24, 1914 in Santa Rosa, NM to the home of Catalino Rivera and Natividad (Gutierrez) Rivera.  A hard working young man, Max, at the age of 22 met the love of his life, Dora Moreno, and they were married on September 2, 1937 at Saint Rose of Lima Catholic Church in Santa Rosa.  Together, they raised three sons and one daughter.  After sixty-eight years of marriage, Max lost Dora after a battle with cancer in September of 2005. Max was engaged in the construction business as a General Contractor at a very young age with his father Catalino Rivera before starting his own construction company.  When Max obtained his Contractor’s License in 1952, he was one of only 1173 licensed contractors in the state of New Mexico.  During his career, Max was recognized with various awards from numerous contracting agencies for projects completed throughout the state of New Mexico.  In addition to his state-wide projects, Max and Company worked on several buildings throughout Santa Rosa, including Saint Rose of Lima Catholic Church.  In a time of economic adversity, Max was able to succeed and become a successful businessman.  After many years of construction projects, Max retired at the age of 72. A devout Christian, Max dedicated his life to the parish of Santa Rosa de Lima.  Max assisted his wife, Dora, in preparing the Altar for various holidays and for the annual Fiestas.  Together they spent many days assisting the various priests assigned to Santa Rosa de Lima, while serving on the Parish Council.  In his devotion to the Lord, Max was a Eucharistic Minister to the sick and homebound.  In addition to these roles in the parish, Max was a cursillista and a member of the Society of San Jose. On March 1, 1970, he joined the Knights of Columbus-achieving the rank of Fourth Degree.  Max was recognized for his tireless efforts in supporting the Church in 2005 with the Saint Francis of Assisi Award. Max enjoyed working his cattle ranch and did so, well into his early nineties.  In his spare time, he and Dora loved to dance and he enjoyed playing the guitar with his compadres when they stopped by to visit. Max is preceded in death by his parents, wife Dora, an infant daughter; Carolina Rivera, son Alfredo Rivera, son-in-law; Anthony Apodaca, and 5 brothers and 2 sisters. Max is survived by his sons; Max (Patricia) Rivera, Jr. of Albuquerque and Robert (Ida) Rivera of Santa Rosa, daughter; Cathy Apodaca of Los Lunas, daughter-in-law; Yolanda Rivera of Santa Rosa, and his special caregiver; Marcos Salas of Santa Rosa.  He is also survived by 15 grandchildren, 36 great-grandchildren and 5 great-great-grandchildren. Recitation of the Most Holy Rosary will be Friday, August 17, 2018 at 7:00 P.M. from Saint Rose of Lima Catholic Church.  The Mass of Christian Burial will be Saturday, August 18, 2018 at 10:00 A.M. at Saint Rose of Lima, with the Reverend Christopher Bernabe officiating.  Interment will follow at Saint Joseph Cemetery in Santa Rosa. Serving as Pallbearers are;  Anthony Rivera, Eric Rivera, Joaquin Rivera, Vincent Rivera, Sam Rivera, Armando Apodaca, Gabriel Apodaca and Estevan Apodaca. Serving as Honorary Pallbearers will be the rest of his grandchildren. Visitation will be Thursday, August 16, 2018 from 1:00-6:00 P.M. and Friday, August 17, 2018 from 1:00-5:00 P.M. at Chavez Funeral Home in Santa Rosa. The family kindly requests in lieu of flowers, donations be made to the parish of Saint Rose of Lima in Santa Rosa. All arrangements have been entrusted to Chavez Funeral Home, 923 S. Third. St., Santa Rosa, NM  88435. 575-472-3369
To order memorial trees or send flowers to the family in memory of Max G. Rivera, please visit our flower store.