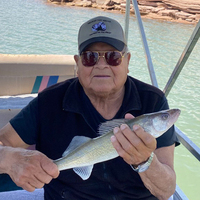 Melton Eloye Saiz Sr., 85 of Fort Sumner, NM passed away Sunday, October 17, 2021 at University Medical Center in Lubbock, TX. Melton was born February 22, 1936 in Fort Sumner, NM to the home of Roman and Perla (Salas) Saiz. He grew up in Fort Sumner where he attended Fort Sumner Schools. Melton began working at the age of 12. On June 1, 1957 he married Mary Ann Birdsong. They made their home in Fort Sumner, Clovis, Lubbock, TX and Plainview, TX before returning to Fort Sumner in 1976. Melton worked most of his life as a truck driver. He hauled hay, drove for K. Barnett & Sons Construction, Bill Jenkins Trucking, and worked at the Flying Twins Truckstop for the Boren family for a time. He later worked for Sprinkle Right in Clovis. For several years he drove for Iowa Truck Leasing and hauled beef. In 1976 Melton and his family returned to Fort Sumner where he worked for Furr's Trucking until the company closed in 1991. He compiled over 1 million miles and received an Accident Free Award from the company. In 1991 Melton began working for Cortese Feed and Supply until his retirement at age 74. He was a dedicated employee. At an age when many people were considering retirement, Melton was still trucking. Melton was a lifelong Catholic and member of St. Anthony Catholic Church in Fort Sumner. He enjoyed gardening, fishing, hunting, and visiting with his friends and family. He was an avid collector of arrowheads, coins, and postage stamps. Melton is preceded in death by his parents Roman and Perla Saiz, his wife of 58 years Mary Ann Saiz in 2015, two infant brothers, two great-grandchildren Mercey Cortese, and Madiano Munoz, and a brother Willie Saiz. Survivors include five children, a son Melton Saiz Jr. of Fort Sumner, four daughters, Elaine Cortese (Greg Young) of Fort Sumner, Diann Dees of Fort Sumner, Joan Saiz of Phoenix, AZ, and Melva Devenport of Clovis, two brothers Roman Saiz of Houston, TX, Jimmy D. Saiz of Amarillo, and one sister Angie Saiz of Amarillo. Also surviving are 13 grandchildren, 31 great-grandchildren, and 2 great-greatgrandchildren along with a host of other relatives and many friends. Visitation for family and friends will be Friday, October 22, 2021 from 1pm to 6pm at the Chavez Funeral Home in Fort Sumner. Holy Rosary will be recited at 7:00 pm Friday, October 22, 2021 at St. Anthony Catholic Church. The funeral Mass will be celebrated at 9:00am Saturday, October 23, 2021 from St. Anthony Catholic Church in Fort Sumner with Father Sotero Sena officiating. Interment will follow in the family plot, Fort Sumner Cemetery. Pallbearers will be Arron Cortese, Luke Cortese, Jason Saiz, Jared Dees, Perry Lopez II, Kevin Serna, Greg Young, Brent Wilcox, and Michael Munoz. Honorary bearers will include Jacob Saiz, James Devenport, and all his grandchildren. All arrangements are under the direction of Chavez Funeral Home, 830 N. Fifth Street, Fort Sumner, New Mexico. (575) 355-2311.
To order memorial trees or send flowers to the family in memory of Melton Saiz Sr., please visit our flower store.