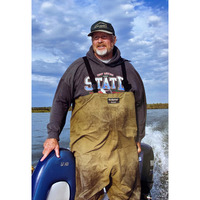 Family, friends, and others whose lives Mel touched are invited to the First United Methodist Church in Fort Sumner, NM on Monday, June 28, 2021 at 2:00 p.m. to remember and honor his life. Melvin (Mel) Lee Holland was born on July 3, 1950 in Clovis, NM to Glenn and Ruth Holland. Mel grew up in Fort Sumner with his parents and sisters Glenda and Nancy. Growing up he liked hunting, fishing, camping and working on cars with his dad. He played football, basketball and ran track for the Foxes and graduated in 1968. Mel received a football scholarship to Western New Mexico University. Later, he transferred to Eastern New Mexico University, where he played football for the Greyhounds, receiving the Mr. Greyhound Award for the top offensive lineman. Mel completed bachelor’s and master’s degrees at ENMU in education and coaching. The love of Mel’s life was Patricia (Pat) Lucero. The two met in Portales in 1977 while Pat taught at James Elementary, and Mel worked for Clovis Schools and assisted in coaching the ENMU Greyhounds. They were married on June 18, 1978. They had two beautiful children, Brad and Brooke, who were the light of his life. Mel taught and coached football, basketball, and track. He had an extraordinary quality to inspire others and push them to be the best they could be, not only in sports but in life. In 1982 he won his first State Football Championship in Capitan, NM. He also traveled to Australia to coach high school football in the “Down Under Bowl.” He won several championships in football and track over the course of his career. Mel was also one of the founders of the North/South 1A and 2A football game. He retired from Carrizozo Municipal Schools after 40 years of service. After retirement, Mel continued to share his wealth of football knowledge. As a volunteer for the Foxes coaching staff during the 2015-2020 football seasons, he proudly assisted his son, Brad Holland, and shared in the honor of winning the 2A State Football Championship in 2017. Enjoying the great outdoors, Mel spent summers in Alaska camping, hunting, fishing for salmon, and driving his boat on the Kenai River. He loved taking in all the beauty and wildlife. Mel was a friend to many. He was giving and generously shared his love of Alaska with his family and friends over the years. Mel was the best grandad anyone could have; he loved his grandkids, Jordan, Faith, Derrick and Payson. They truly were his “happy place.” After retirement he enjoyed following his grandkids and watching them play football, basketball, softball, and T-ball. He helped coach little league football teams and drove them to practices and games. He enjoyed teaching his grandkids how to fish, camp, and hunt. He loved every moment of being a grandad to “J-Bird, Faithy, D-man and Pablo.” He is survived by Pat, his wife of more than 42 years, of their home in Ruidoso; one son and daughter-in-law, Brad and Kasi Holland; his daughter and son-in-law Brooke and Ryan Roper; four grandchildren, Jordan, Faith, Derrick, and Payson; one sister, Nancy Giannini, as well as numerous nieces and nephews. He was preceded in death by his parents, Glenn and Ruth Holland, and a sister, Glenda Collins. Mel Holland passed away on April 22, 2021 in Albuquerque, NM. To leave a tribute, share a memory or sign the online guestbook go to www.chavezfuneralhome. Arrangements are under the direction of Chavez Funeral Home, 830 N. Fifth Street, Fort Sumner, NM. (575) 355-2311.
To order memorial trees or send flowers to the family in memory of Melvin "Mel" Holland, please visit our flower store.