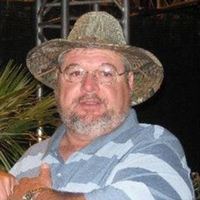 Mike Anthony Cantrell, 63 a resident of De Baca County for the past 38 years passed away at Lake Sumner, NM on Thursday, October 6, 2022. Mike was born January 27, 1959 in Albuquerque, NM to the home of Arlie and Rita (Jaramillo) Cantrell. He grew up and attended school in Albuquerque. At the age of 14 he began working for Big-O Tires in Albuquerque. While working at Big-O Tires he met the love of his life Cheryl Ann Rasche in 1979. They were married in Albuquerque in 1980. A son Michael Cantrell II was born in 1981. A customer of Mike’s who lived in Fort Sumner asked him to consider moving to Fort Sumner and open a tire shop. In 1983 Mike and Cheryl opened a New Mexico map, found Fort Sumner and made the trip. They loved the Fort Sumner valley, and the people of Fort Sumner. The following year 1984 they made Fort Sumner their home. Mike opened the Flying Twins Truck Stop building east of Fort Sumner. Mike later purchased a service station from Raymond Drake at the corner of 9th and Sumner Avenue. Mike and Cheryl operated the C & M Auto Center from 1986 until 1999. Mike later worked for one year as a painter at Nova Bus Company in Roswell. He also worked for David Fikany as a Manager at ZLR Auto. In 2005 he was hired in his current position as the Lake Sumner Dam Tender. He was in his 18th year in this position. Mike and Cheryl were members of the Fraternal Order of Eagles where Mike served as President for three terms. The Cantrell’s participated in the annual Lake Sumner Fishing Tournament for the Eagles Club. Mike enjoyed watching NASCAR races, a little fishing, and watching Judge Judy. He enjoyed visiting the casinos and he and Cheryl had many great trips to Laughlin, NV. Mike made the best beef jerky and also enjoyed cooking his awesome chili for every occasion. Mike and Cheryl lost their son Michael Cantrell II in 2019. Mike is also preceded in death by his parents Arlie and Rita Cantrell, a sister Margaret Herrera, father-in-law Reverend Richard Rasche, and a brother-in-law David Rasche in 2021. Mike will be missed by his friends and family. He is survived by his wife of 42 years Cheryl Cantrell of Lake Sumner, a nephew Mike and Cheryl raised as a son, Chris Cantrell (Shannon) of Albuquerque, a brother Dwayne Cantrell of Albuquerque, two sisters Patty McCants of Lake Havasu, AZ, Terrie Bitterof of Minot, North Dakota, his mother-in-law Phyllis Rasche of Shelbyville, Indiana, a sister in law Peggy Rasche of Waldron, Indiana, and two nieces Lindsey Rasche, and Jaime Willis (Brian) of Shelbyville, IN along with many other relatives, co-workers, and friends. A memorial service will be held at 11:00 am Monday, October 10, 2022 at The Church on The Hill in Fort Sumner, New Mexico officiated by Pastor Richard Terrell. Urn bearers will be Lewis Hancock, Lewis Hisel, VE Propps, and Knox Cortese. The family requests memorial contributions to a home for at risk youth, Assurance Home of Roswell, 1000 E. 18th Street, Roswell, NM 88201 or Fort Sumner Cemetery Association, P. O. Box 180, Fort Sumner, New Mexico 88119. Arrangements are under the direction of Chavez Funeral Home, 830 N. Fifth Street, Fort Sumner, New Mexico. (575) 355-2311. If you wish to share a favorite memory or sign Mike’s guest book go to www.chavezfuneralhome.com
To order memorial trees or send flowers to the family in memory of Mike Cantrell, please visit our flower store.

The Church On The Hill - Fort Sumner