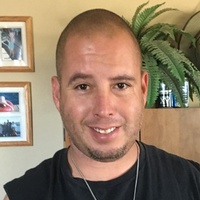 Michael Anthony Cantrell II, 37, was born June 07, 1981 in Albuquerque, NM to the home of Michael and Cheryl (Rasche) Cantrell. He passed away Thursday, February 07, 2019 in Portales. Michael's family moved to Fort Sumner when he was two. Michael attended Fort Sumner schools K-12, graduating with the class of 1999. While in school Michael excelled in Fort Sumner Highschool basketball, football, and track, and was honored with the Fox Award in 1999. He was a member of the 1995 and 1998 Fox State Football Championship teams, their comeback years. He was also a member of the 1999 State Track Championship team and currently holds two Fort Sumner School track relay records. While in high school, Michael worked for Fort Sumner Lumber Company. Michael attended ENMU Portales for four years working on a Criminal Justice degree. During his time at ENMU he worked in the Child Development Center and participated in a ride along program with Campus Security. During the summer months he worked for the City of Portales Road Department. After college Michael took a position with the City of Portales Water Department, where he became a foreman. He worked 9 years for the City of Portales. He also enjoyed building construction and worked with Andrew Sosa and Dom Lopez at Dom’s Garage, he later worked for Home Depot in Roswell. Recently he was working for Jason Jacks at Double J Construction in Fort Sumner.Michael loved to run, it was his favorite past time. He enjoyed cruising the Fort Sumner valley watching the deer. He enjoyed golf, and playing a pick-up basketball game or throwing horseshoes with his friends. He especially enjoyed spending time with his friends and their families. He loved children and the children always gathered around Michael. Michael had many friends. According to his mom, Michael was a very generous person, he would give you the shirt off his back, and was always there for the underdog, helping anyone in need. He had a huge heart, and loved his family and his dog, Shadow. Michael is preceded in death by his maternal grandfather Rev. Richard Rasche in 1984, his paternal grandfather Art Cantrell in 2018, his aunt Margaret Cantrell, and his brother Josh Kenyon in 2008. A loving son, grandson, nephew, cousin, and friend, Michael will be missed by his mom and dad Mike and Cheryl Cantrell of Lake Sumner, his maternal grandmother Phyllis Rasche of Shelbyville, IN, paternal grandmother Rita Cantrell of Albuquerque, his brother Chris Cantrell (Shannon) of Lake Havasu City, AZ, two sisters Shauna Walker of Paradise, TX and Krista Kimball of Saint Francesville, LA, his uncle David Rasche (Peggy) of Waldon, IN and their children Jaime Willis (Bryan) and Lindsey Rasche (Cody Schutt) both of Shelbyville, IN, cousins Brianna and Nicholas, Makayla all of Shelbyville, IN, two aunts Patty McCants of Lake Havasu City, AZ and Terri Bitteroff (Scott) of Minot, North Dakota, an uncle Dwayne Cantrell of Albuquerque along with a host of other relatives and many loving friends.A memorial service will be held at 10:00 am Tuesday, February 12, 2019 at The Church on The Hill in Fort Sumner with Pastor Anna Teeter-Gentile and Mr. Richard Terrell officiating. Arrangements are under the direction of Chavez Funeral Home, 830 N. Fifth Street, Fort Sumner, New Mexico. (575) 355-2311.
To order memorial trees or send flowers to the family in memory of Michael Cantrell II, please visit our flower store.