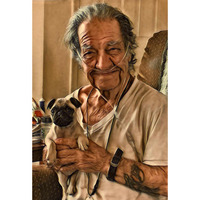 Pat Lorenzo Olivas, 78 of Fort Sumner, NM passed away in the early morning hours of Monday, January 6, 2020 at his home. He was born December 5, 1941 in Fort Sumner to the home of Reymundo and Soledad (Trujillo) Olivas. He grew up in Fort Sumner and attended Fort Sumner Schools. Pat married Florene Griffin on December 3, 1966 in Fort Sumner. He worked for several years as an orderly at the Pecos Valley Care Center. He served several years as a volunteer EMT with Fort Sumner Ambulance Service. He later moved to Portales where he worked in the Maintenance Department at Eastern New Mexico University until his retirement in 1987. Pat was a member of First Baptist Church in Fort Sumner. He is preceded in death by his parents and a sister Lydia Villa. Survivors include his wife Florene Olivas of Fort Sumner, a daughter Kristi Olivas of Portales, two sons Jodi Olivas of Amarillo and Robert Olivas of Fort Sumner. Also surviving are 10 grandchildren and 5 great-grandchildren. A memorial service will be held at 1:00 pm Wednesday, January 22, 2020 at First Baptist Church in Fort Sumner, NM. Arrangements are under the direction of Chavez Funeral Home, 830 N. Fifth Street, Fort Sumner, NM. (575) 355-2311.
To order memorial trees or send flowers to the family in memory of Pat L Olivas, please visit our flower store.