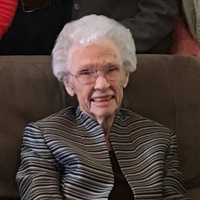 Pauline Reilly Houlihan Johnson, of Santa Rosa, NM, claimed her gift of eternal life in God's kingdom on October 26, 2019 in the presence of family.  She passed peacefully at her home.  One of nine children of Ed and Mae Reilly, she was born in Wichita Falls, TX on January 15, 1925 and raised there and in Santa Rosa.  She married Pat Houlihan after WW II and they raised seven children in Albuquerque and Santa Fe before settling in Santa Rosa in 1967 where they continued to raise their children and manage the family ranch.  Pauline was a longtime member of St. Rose of Lima Parish where Pat served as Deacon for many years.  Always active in their community, she and Pat helped spearhead the efforts to establish a nursing home or assisted living facility by donating land, raising funds and working with other pillars of the community which resulted in the Los Amigos Home in Santa Rosa. After Pat's death in 2000, Pauline continued her life in Santa Rosa and relished her growing family, her numerous visits with her siblings and their families, her active participation in ranch business and community affairs, and her profound worship of her faith.  She married Tom Johnson in 2002 and they had 11 happy years together.  Tom passed in 2013. In addition to her two spouses, Pauline was preceded in death by her parents, brothers Edward (Buck), Dick, and Joe (Doc) Reilly, sister El Wolff and daughter-in-law Carmen Romero Houlihan. She is survived by sisters Beth Richards, Theresa Lucas, Celia Kubicek and Jane Hoff and husband Joe (Bud).  She is also survived by her children Dave, Dan and wife Roseann, Annette Boggs and husband Fred, Linda Cheshire and  husband  Dean, Don and wife Nancy, Dale and wife Doris, and Dennis.  She also leaves in her monumental legacy 18 grandchildren and 26 great-grandchildren and numerous nieces and nephews. Recitation of the Most Holy Rosary will be at 7:00 PM Tuesday, October 29, 2019 at St. Rose of Lima Catholic Church in Santa Rosa. Mass of Christian Burial will be celebrated at 10:00 AM Wednesday, October 30, 2019 with Father Christopher Bernabe officiating. Burial will follow in the Houlihan family plot at St. Joseph Cemetery. The honor of serving as pall bearers has been entrusted to grandsons Patrick Houlihan, Bryan Boggs, Cory Cheshire, Sean Houlihan, Jason Houlihan and Terrell Houlihan. In lieu of flowers, the family kindly asks that donations be made to Saint Joseph Cemetery Association, 439 S. Third St., Santa Rosa, NM  88435 or to the Santa Rosa Ambulance Service, 244 S. Fourth St., Santa Rosa, NM  88435. All arrangements have been entrusted to Chavez Funeral Home, 923 S. Third St., Santa Rosa, NM  88435.  575-472-3369.  To place an on-line tribute please visit www.chavezfuneralhome.com
To order memorial trees or send flowers to the family in memory of Pauline Houlihan Johnson, please visit our flower store.