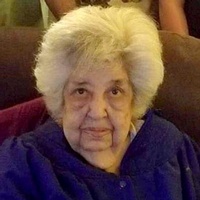 Phoebe B. Sisneros, 94 of Santa Rosa, passed away peacefully at her home on Sunday, January 27, 2019 surrounded by her loving family. Phoebe was born on August 16, 1924 in Santa Rosa, NM to the home of Remigio Baca and Juanita (Velasquez) Baca.  She attended school in Santa Rosa, and on May 31, 1948 married Juan Francisco Sisneros.  Together they made their home in Santa Rosa, where Phoebe worked in various restaurants and as a housekeeper for various families. A life-long resident of Santa Rosa, Phoebe was a member of the Church of Christ, and was also an accomplished accordion player, accompanying her husband, Juan and brother Cleofas Baca in a band—she also enjoyed singing.  Some of her hobbies included quilting and crocheting, going to casinos, cooking and baking, but she is particularly remembered for her tamales and empanadas.  Above all, Phoebe loved her family dearly and thoroughly enjoyed the time she spent with them, as she was a loving mother, grandmother, aunt and sister. Phoebe is preceded in death by her parents, husband; Juan Francisco Sisneros, son; Alejandro Sisneros, grandson; Michael Caleb Sisneros, as well as her brothers and sisters. Phoebe is survived by her children; Angie Lucero and husband Robert of Albuquerque, NM, Johnny Sisneros of Palmero, Illinois, Harold Sisneros of Santa Rosa, Priscilla Sisneros of Santa Rosa, Marcos Sisneros of Eloy, Arizona, Cathy Gallegos and husband Charlie of Santa Rosa, David Sisneros and wife Sandra of Santa Rosa, Maida Sisneros and Annette Casaus of Ft. Sumner, NM, Nancy Sena and companion Andrew Tapia of Santa Rosa and sister; Guadalupe “Pita” Gomez and husband Fred of Albuquerque,  23 grandchildren, 41 great-grandchildren and 5 great-great-grandchildren, as well as numerous nephews, nieces, family and friends. Serving as Pallbearers will be; Cesar Gallegos, Carlos Gallegos, Andres Soliz, Clifford Sena, Aaron Sena, Francisco Lucero, Robert Sena and Eric Sena.  Honorary Pallbearers will include; David J. Sisneros, Phoebe A. McNeely, Vanessa Sisneros, Gabriel Soliz, Cordero Gallegos, Robert Lucero, II, Cristoval Gallegos and Remigio Baca. Visitation is scheduled for Thursday, January 31, 2019 from 1:00 P.M. to 6:00 P.M. at Chavez Funeral Home in Santa Rosa. Funeral services are scheduled for Friday, February 1, 2019 at 11:00 A.M. at the Church of Christ in Santa Rosa, with Mr. Keith Ross officiating.  Interment will follow at Evergreen Cemetery. A meal will be held at the Knights of Columbus hall in Santa Rosa following the burial. All services have been entrusted to Chavez Funeral Home, 923 S. Third St., Santa Rosa, NM.  575-472-3369.  To place an on-line condolence, please visit www.chavezfuneralhome.com
To order memorial trees or send flowers to the family in memory of Phoebe B Sisneros, please visit our flower store.