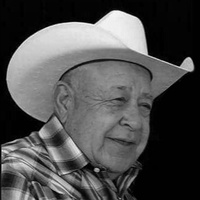 Raymond Gallegos, 67, of Encino, NM passed away Monday, October 29, 2018. Raymond was born on December 19, 1950 in Albuquerque, NM to the home of Salvador and Rose Lopez Gallegos. He was reared and attended school in Albuquerque. A life-long Catholic, he was a devoted parishioner of Our Lady of Guadalupe Catholic Church in Encino, NM. Raymond married Janet Mestas on June 7, 1969 in Albuquerque, and in 1977 made their home in Encino. He began his career with NMDOT in 1985 and retired in 2013, after 28 years of service. Raymond was currently working for the Village of Encino. Raymond enjoyed fishing, hunting, camping, cooking, and leather working. He enjoyed spending time with his family and friends, and most especially enjoyed spoiling his grandchildren. Raymond is preceded in death by his parents, a son; Anthony Gallegos, brothers; Toby Gallegos and Filbrick Gallegos, sister-in-law; Mary Ann Pena and parents-in-law; Nestor and Helen Mestas. Raymond is survived by his wife of 49 years; Janet of the family home in Encino, his sons; Victor Gallegos and wife Tracie of Encino and Lawrence Gallegos, also of Encino.  A daughter; Christina Aragon and husband Dwaine of Albuquerque, grandsons; Raymond Gallegos of Encino and Luke Proctor of Hotsprings, Arkansas, granddaughters; Victoria Gallegos of Vaughn, Meghan Proctor of Hotsprings, Arkansas and Allie Davenport of Ponder, Texas.  He is also survived by his brother; Robert Gallegos of Albuquerque, sisters; Anna Gallegos of Albuquerque and Mela Akers and husband Paul of Edgewood, brother-in-law; Terry Pena of Rio Rancho and sister-in-law Cecilia Williams and husband Bill of Moriarty as well as numerous nephews, nieces, family and friends. Recitation of the Most Holy Rosary is scheduled for Saturday, November 3, 2018 at 10:30 A.M. at Our Lady of Guadalupe Catholic Church in Encino, immediately followed by the Mass of Christian Burial, with Father Leonard Paskus officiating.  Interment will follow at Encino Catholic Cemetery. Serving as Pallbearers are; Isidoro Mora, Michael Mora, Fernando Chavez, Antonio Chavez, Tommy Apodaca and Ernie Garcia.  Honorary Pallbearers are; his grandchildren, Godchildren, nephews, nieces, Joe Madril, Ernest Lucero, Joe B. Marez, Gilbert Chavez and Ismael Rodriquez. Visitation will be Thursday, November 1, 2018 from 1:00 P.M. to 4:00 P.M. and on Friday, November 2, 2018 from 1:00 P.M. to 4:00 P.M. at Chavez Funeral Home in Santa Rosa. All arrangements have been entrusted to Chavez Funeral Home, 923 S. Third St., Santa Rosa, NM  88435.  (575) 472-3369.  To place an on-line condolence, please visit www.chavezfuneralhome.com
To order memorial trees or send flowers to the family in memory of Raymond Gallegos, please visit our flower store.

Our Lady of Guadalupe Encino