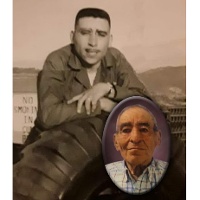 Robert E. Moya, age 83 a longtime Clovis, NM resident passed away at his home in Portales, NM Monday, June 10, 2019 following an extended illness. He was born April 22, 1936 in Pastura, NM to the home of Jose and Beatrice (Ortega) Moya. He was raised by his aunt Petra Ortega Chavez. Robert attended schools in Pastura and Santa Rosa. He worked for many years at El Rancho Feeds in Clovis and later owned and operated a trucking company, hauling hay until his retirement. Robert served in the U.S. Army with Battery B, 168th anti Aircraft Artillery Battalion. He served from June 2, 1955 until his honorable discharge on May 29, 1958. He made his home in Clovis since 1955, and recently moved to Portales. He enjoyed fishing, camping, cook outs and spending time with his family.  Robert is preceded in death by his parents, infant twins, and a brother Leo Moya. Survivors include his wife Berta Moya of Portales, one son Joe Moya of Clovis, four daughters Mary Castillo of Amarillo, TX, Beatrice Sandoval and her husband Daniel of Amarillo, Jackie Carrillo and husband Carlos of Seminole, TX, and Juanita Moya of Hereford, TX. Also surviving is one brother John Moya of Clovis and a sister Edwina George of Madisonville, Tennessee. Also surviving are 18 grandchildren, 53 great-grandchildren and 4 great-great-grandchildren along with a host of other relatives and many friends. Visitation hours will be Friday, June 14, 2019 from 1pm to 5pm at the Chavez Funeral Home, 830 N. Fifth Street, Fort Sumner, New Mexico. A graveside service will be held at 11:00 am Saturday, June 15, 2019 at St. Helen's Catholic Cemetery in Pastura, New Mexico with his great-grandson, Deacon Chris Moreno officiating. Pallbearers will include Chris Moreno, Patricio Garcia, Nat Garcia, Daniel Sandoval Jr., Isaiah Salcido, and Marco Esparza. All arrangements are under the direction of Chavez Funeral Home, 830 N. Fifth Street, Fort Sumner, New Mexico. (575) 355-2311.
To order memorial trees or send flowers to the family in memory of Robert E. Moya, please visit our flower store.