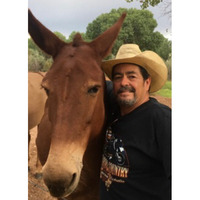 Ronnie Gonzales, 62, of Albuquerque and Fort Sumner NM, was called to his eternal resting place on his birthday, December 21, 2021. He passed away peacefully and surrounded by loved ones. He was born in Fort Sumner, NM and a graduate of Del Norte High in Albuquerque in 1978. He was an electrician journeyman for over 38 years. With his outgoing personality, he talked to everyone and no one left without a good story and a laugh. An avid motorcycle rider, harmonica player, hunter, fisherman and mountain outdoorsman. Ronnie, a muleskinner, was a member of Back Country Horseman and Mules. He enjoyed exploring all of New Mexico, where he seemed to know every backroad. He was always eager to share this passion by inviting others to go on what he called “Ron’s Outdoor Adventures.” Ronnie is survived by his wife, Rhonda, of 38 years, their children Justin, Ashley Sais (Stephen), grandchildren, Christian, Crisana, Alexandra and Lucia; his mother Mary Ann Archuleta, sister Rosalie Joiner (James), brother Daniel Gonzales, sister Janet Lucero (Nathan), many nieces and nephews. He was preceded in death by his dad, Lewis Gonzales Jr., grandparents, Joe and Annie Archuleta, grandparents, Dommie and Lewis Gonzales, Sr. There will be visitation held on Tuesday, December 28, 2021 from 1pm - 6 pm at the Chavez Funeral Home Chapel in Fort Sumner, NM. Rosary and funeral Mass will be held at 9:30 am Wednesday, December 29 at Queen of Heaven Catholic Church in Albuquerque. Interment to follow at Fort Sumner Cemetery at 3:30 pm. Pallbearers will include James Joiner, Nathan Lucero, Andrew Salazar, CJ Baca, Ralph Abeyta, Eddie Serbin, Marvin Montano, Simon Lucero and Antonio Archuleta. Honorary pallbearers are APIC Solutions friends. Arrangements are under the direction of Chavez Funeral Home, 830 N. Fifth Street, Fort Sumner, New Mexico. (575) 355-2311.
To order memorial trees or send flowers to the family in memory of Ron Lee Gonzales, please visit our flower store.