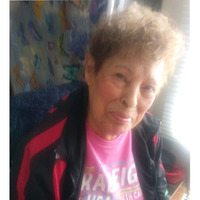 Rosana Adkins, 77 a lifelong resident of Vaughn, NM passed away Saturday, January 02, 2021 at Eastern NM Medical Center in Roswell following an illness. Rosana was born June 01, 1943 in Vaughn to the home of Eulalio and Jacoba (Sisneros) Madrid. She grew up in Vaughn where she attended schools, graduating with the Vaughn High School Class of 1962. Rosana married James T. Adkins at St. Mary's Catholic Church in Vaughn on February 07, 1965. She worked as a waitress in the Vaughn Restaurants and Cafes. She also worked as a housekeeper for the Sands Motel for several years. Rosana was a member of St. Mary's Catholic Church in Vaughn where she sang with the church choir. She prayed the rosary daily. She was a member of the Vaughn Senior Citizen's Center. She enjoyed playing Bingo, and watching her Novelas. Rosana supported her family in all their school activities and attended their sporting events throughout their school years. And she loved the Dallas Cowboys. In 2017 Rosana moved to Roswell to be near her family and doctors. While in Roswell, she attended the Roswell Joy Center and Roswell Senior Circle. Rosana is preceded in death by her parents, her husband James T. Adkins in 1992, two sons Michael A. Adkins in 1966, and Glenn T. Adkins in 1989, two sisters Molly Madrid and Patsy Madrid and an aunt who raised her Antonia Aragon. Rosana is survived by a daughter Muriel Adkins of Roswell, three grand daughters Liberty K. Chavez (Thomas) of Roswell, Ivory Adkins (Victor Sandoval) of Pampa, Texas, and Iris J. Adkins (Eric Torres) of Roswell, Seven great-grandchildren Selena Abeita (Ryan) of Jacksonville, North Carolina, Marqise Chavez (Kaleb) of Roswell, Sebastian Chavez of Roswell, Nathaniel Gallegos of Canyon, TX, Diego Gallegos Jr. of Pampa, TX, Alexandria Gallegos of Pampa, TX, and Aria Sandoval of Amarillo, two great-great grandchildren Olivia Abeita of Jacksonville, NC and Kayden Seabrease of Roswell, NM. Also surviving are her siblings four sisters Betty Martinez of Roswell, Terry Corrales of Roswell, Fatima Garcia of Clovis and Sylvia Rodriguez of Clovis, two brothers Manuel Madrid of Albuquerque and Steve Madrid of Vaughn, along with four God-children Norman Madrid, Mellodi Sanchez, Carla Lopez, and Jose Rael and a host of other relatives and many friends. A family viewing was held at the Chavez Funeral Home Chapel on Monday, January 4, 2021. Cremation has taken place. The Rosary and Funeral Mass were held at 1:00pm, Saturday, January 9, 2021 at St. Mary's Catholic Church in Vaughn, New Mexico with Father Sotero A. Sena officiating. Interment of cremains followed at Evergreen Cemetery. Urn bearers were Roberta Sanchez and Carla Lopez. Honorary bearers were all her nieces. Due to the current COVID-19 NM Department of Health Order, the services were limited to the family. Please keep Rosana and her family in your prayers. You may leave a tribute, share a favorite memory or sign the online guest book at www.chavezfuneralhome.com All arrangements are under the direction of Chavez Funeral Home, 830 N. Fifth Street, Fort Sumner, New Mexico. (575) 355-2311.
To order memorial trees or send flowers to the family in memory of Rosana Adkins, please visit our flower store.