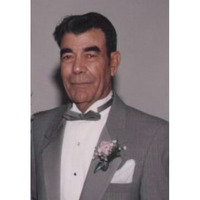 Rumaldo S. Gonzales, 96 of Clovis and a longtime resident of Fort Sumner passed away at his Clovis home on Friday, February 04, 2022. Rumaldo was born June 25, 1925 in Fort Sumner to the home of Rumaldo and Juanita (Segura) Gonzales. He grew up and attended Fort Sumner Schools. At the age of 18 Rumaldo enlisted and served in the U.S. Army from October 8, 1943 until his honorable discharge on December 07, 1945. He was assigned to the Military Police Guard Detachment, 1804th Service Command Unit, Prisoner of War Camp. His battles and campaigns included Normandy, Northern France, Ardennes, Rhineland, and Central Europe. His decorations and citations include the Combat Infantry Badge, Sharpshooter Rifle, American Theater Victory Medal, European African Middle Eastern Medal. He received a Purple Heart after he was shot in the leg while in Germany. Following his hospital stay, Rumaldo was assigned a flight home but gave his seat to a fellow serviceman who was desperate to get home and exchanged the serviceman for a journey home on the Queen Mary. Rumaldo married Natividad Zamora in Fort Sumner on December 6, 1952. He worked on area ranches before he was hired by the Santa Fe Railroad. He was a member of the track crew and the Maintenance of Way Engineers Union. He retired after 32 years with the Santa Fe Railroad. Rumaldo and Natividad were lifelong members of St. Anthony Catholic Church in Fort Sumner. They made their home in Clovis in 2001. His family was the utmost importance. Rumaldo always visited family, in their homes, at hospitals or nursing homes. He enjoyed watching baseball and his favorite team was the Atlanta Braves. Rumaldo is preceded in death by his wife of 67 years, Natividad Gonzales on September 29, 2019, his parents, and all his siblings. Survivors include a daughter Stefanie Brady and husband Shannon of Clovis, NM and their children; Toby Brady, Sarah and Josh Bumgarner, and Shay and Trey Roberts; a son, Ricardo Gonzales and wife Loretta of Albuquerque, NM and their children; Melissa and Robert Burgess, Amy and Mike Sanchez, Melinda and Chris Backen, Ricardo Gonzales, and Johnelle Gonzales along with 12 great-grandchildren and 3 great-great-grandchildren. Also with many nieces, nephews, other relatives and many friends. Visitation will be from 1:00-2:00pm Tuesday, February 8, 2022 at St. Anthony Catholic Church. Holy Rosary and Funeral Mass will follow at 2:00pm at St. Anthony Catholic with Father Christopher Bernabe and Father Sotero Sena officiating. Interment with military honors will follow in the family plot at Fort Sumner Cemetery. Pallbearers will include Tim Benoist, Ricardo Gonzales, Robert Crespin, Chris Zimmerman, Matthew Granger, and Bob Zimmerman. Arrangements are under the direction of Chavez Funeral Home, 830 N. Fifth Street, Fort Sumner, New Mexico. (575) 355-2311. To place an online tribute or sign the guest book, go to www.chavezfuneralhome.com
To order memorial trees or send flowers to the family in memory of Rumaldo S. Gonzales, please visit our flower store.