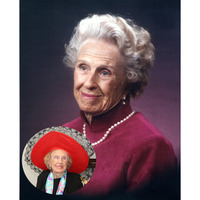 Sarabel Hall Key was born on December 18, 1921 in Fort Sumner, NM. She resided south of Fort Sumner where her dad worked on the “Old Bar V” ranch and the “LX” ranch. She was home schooled and taught how to play the piano by her mother and graduated in 1938. She attended Lindenwood University in St Charles, MO and then Graduated from Texas Tech University where she earned a degree in Business Administration. She then received a Civil Service Certificate and worked at the Fort Sumner Air Base where she was the first woman to work on the Glider Base during WWII. In the late 1960’s she returned to school at ENMU and received her master’s in VOE and started teaching. She married WE Overton, a rancher and they had 4 children: Sunny Overton Lappenbusch, William Elbert Overton Jr, Leah Wayne Overton and Charles Warren Overton. During her children’s young years she was very active in teaching the Yeso Community’s young children to square dance, present church programs and work with 4-H as well as FFA clubs. Her love was music. She took every opportunity given to her to play the piano and sing. She was always active on Old Fort Days, she played for many weddings, dances and all of the churches. She especially enjoy jamming with her sons. She encouraged all of her children, grands and great grands to learn to play an instrument. She was President of the New Mexico Cowbelles’ and was awarded a trip to Hawaii with the New Mexico Farm Bureau board members for her work while in office. Sarabel spent many hours on the El Yeso Ranch helping her son after their father died. She was always willing to do anything she could to make her children successful. In the following years she worked as a teacher in the Santa Rosa School district and then on to work for a law firm in Albuquerque and accepted a job with the Corp of Engineers in Las Alamos for 5 years. She returned to Fort Sumner and was elected De Baca County Tax Assessor for 5 years. She then accepted another Civil Service job at Canon Air Force Base in Clovis where she drove back and forth for another couple of years until she married WM Key. Her remaining years were spent with WM Key until his death, she made her home in Fort Sumner and for the last 4 years the Bee Hive in Portales, NM. She is survived by her four children: Sunny Lappenbusch, Bill and wife Dude Overton, Leah Wayne Overton, Charlie and his wife Beverly Overton; Grand Children: Susan and Phillip Schlemmer, Will and Nancy Lappenbusch, Leah and Clint Wheeler, Cambria Harkey, John Harkey, Shay and husband Mike Foley, Kelsey and husband Ryan McCollum, Mark Overton, Kelly Overton, Charlotte Overton and Kimberly Ivy ; Great Grand Children: Sara, Anna, Rachel, Kyle and Natalie Schlemmer; Lindsay and Brandt Munson, Caden, Mackenzie and Beau Wheeler; Lacey and Colby McCollum; Dylan and Blake Foley; Zack Lappenbusch. She was preceded in death by her father, Charles Carter Hall, mother, Mable Depuy Hall, husband, WM Key, brother, Charles Carter Hall Jr, sister Audrey Moss, Nadine and Lou Ellen Lobley, and a granddaughter, Crystal Anne Overton. Funeral services will be held at 2:00 pm Saturday, October 16, 2021 at First United Methodist Church in Fort Sumner with her sons Charlie Overton and Bill Overton officiating. Interment will follow in the Hall family plot, Fort Sumner Cemetery. Pallbearers will include David Smith, Chris Copeland and all her Grand Children. The family request contributions in memory of Sarabel Hall Key to the Fort Sumner Cemetery Association, P.O. Box 180, Fort Sumner, NM 88119. Arrangements are under the direction of Chavez Funeral Home, 830 N. Fifth Street, Fort Sumner, New Mexico. (575) 355-2311.
To order memorial trees or send flowers to the family in memory of Sarabel Hall Key, please visit our flower store.