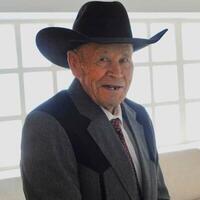 Silvano Bernardo Sisneros, 84, of Santa Rosa, NM joined our Lord in heaven on November 21, 2022. Silvano, also known as Silver, was born January 11th, 1938 in Santa Rosa, New Mexico. He was the second born child of Manuel de Atocha and Maria de la Luz Sisneros. An heir to the Anton Chico Land Grant, Silvano was raised in Colonias, NM and attended Santa Rosa Consolidated Schools. Silvano played defensive linebacker for the Santa Rosa Lions and helped the team win the State Football Championship in 1955. He graduated in 1957 from Santa Rosa High School. After high school Silvano served in the National Guard and went on to become a longtime rancher. It was his pride and joy to pass on the cowboy way of life to his children and grandchildren. Silvano was also a welder. He owned his own welding business in Santa Rosa for many years. Working on windmills was his specialty. Silvano loved riding horses and especially cattle branding season. He also loved the many dogs that he had throughout the years. Silvano was a lifelong Catholic and a member of the San Jose parish in Colonias, and the St. Rose of Lima parish in Santa Rosa. Silvano married his wife Seferina in 1963 and told anyone who would listen how much he loved her and how great of a cook she is. His nicknames for her were Sefie, Mi Sugar, and La Babe. Silvano was a father of 5 children, and a grandfather to 7 grandchildren and 3 great-grandchildren. He was a mentor and hero to all of them. Silvano and Seferina were also foster parents to several children needing emergency placement in the 1990’s. Silvano had a charismatic personality and had a contagious smile. He loved to tell funny jokes and stories. He lived a life of true value and meaning. Silvano was first in line to lend a helping hand and live out the values that he cared deeply about. Silvano is survived by his wife Seferina Sisneros; children Frank Sisneros (Twyla), Melissa Sisneros, Ursula Myers (Levi), and Irene Sisneros-Rueda (Carlos); Grandchildren Devyn Sisneros, Dustyn Sisneros, Samantha Olguin (Carlos) Jessi Jo Stokes (Kolton), Cayce Lewis (Ashley), Silver Myers and Cole Sisneros; Great-grand children Cherokee Russell, Sedona Stokes, Cayte Lewis; Siblings Reynaldo Sisneros (Clara), Frances Wilkerson (Byron), and Patsy Magin, and numerous nephews, nieces, family and friends. He is preceded in death by his son Silver Cree Sisneros, father Manuel de Atocha Sisneros, mother Maria de la Luz Sisneros, in-laws Prudencio and Irene Castillo, and brother-in-law Tom Magin. Visitation for family and friends will be Wednesday, November 23, 2022, from 1-6pm at Chavez Funeral Home in Santa Rosa. Recitation of The Most Holy Rosary, followed by The Mass of Christian Burial will be Saturday, November 26, 2022 at 10am at Saint Rose of Lima Catholic Church in Santa Rosa. Following a meal and fellowship at the Blue Hole Convention Center in Santa Rosa, interment will take place at San Jose Cemetery in Colonias, NM. Pallbearers are Silvano’s grandchildren Devyn Sisneros, Dustyn Sisneros, Jessi Jo Stokes, Cayce Lewis, Samantha Olguin, Cole Sisneros, brother Reynaldo Sisneros and compadre, Tudy Sanchez. Honorary pallbearers are granddaughter Silver Myers, primo Christian Sisneros, and all of Silvano’s nieces, nephews and primos. Services are under the direction of Chavez Funeral Home, 923 S. Third St., Santa Rosa, NM 88435. 575-472-3369. To place an online condolence or tribute, please visit www.chavezfuneralhome.com.
To order memorial trees or send flowers to the family in memory of Silvano Sisneros, please visit our flower store.