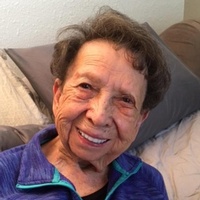 Soledad M. Chavez, 83, of Santa Rosa, NM passed away with her family at her bedside at University Medical Center in Lubbock, Texas on Saturday, December 29, 2018. Soledad was born on January 1, 1935 to the home of Trinidad Sena and Sole (Montoya) Sena in Borica, NM.  She attended school in Santa Rosa and on May 7, 1960 married Jose H. Chavez at Saint Rose of Lima Catholic Church in Santa Rosa. Soledad made her home in Santa Rosa, where she was a home maker and reared her two children, Johnny and Elizabeth.  She was an active parishioner, who made a big sacrifice to send their children to school at St. Rose of Lima, she also lent a helping hand with church functions.  After the death of her husband in 2008 she moved to Clovis, NM to be with her daughter Elizabeth.  She and her husband , Jose, in their spare time together enjoyed fishing, camping and working outdoors.  She also used to tinker with fixing televisions, vacuum cleaners, CB radios, and working with electronics, however, she particularly enjoyed the time she spent with her family. Soledad is preceded in death by her parents, her husband; Jose in 2008, step-mother; Eleanor Sena, grandparents; Thomas and Delfinia Sena, uncles; Pete Sena, Gabe Sena and Al Sena, (aunts that were more like sisters being that her grandmother, Delfinia, raised her) aunts ; Theresa (Sena) Brasell, Lugarda (Sena) Zamora, Mary (Sena) Sanchez, Dolores (Sena) Flores, and brothers; Thomas Sena and Ted Sena, Sister; Veronica Sena. She is survived by her son; Johnny J. Chavez and wife Cathy of Albuquerque, NM and daughter; Elizabeth A. Kiser and husband Keith of Clovis, NM.  Also surviving are her grandchildren; Jarod Kiser and wife Morgan, Heather Chavez, Monika Kiser, Christiana Chavez and great-grandchildren;  Drayven Smith and Duke Kiser. Recitation of the Most Holy Rosary is scheduled for Friday, January 4, 2019 at 7:00 P.M. at Saint Rose of Lima Catholic Church.  The Mass of Christian Burial will follow on Saturday, January 5, 2019 at 10:00 A.M. at Saint Rose of Lima with Monsignor Anthony Bolman officiating.  Interment will follow in the family plot at Saint Joseph Cemetery in Santa Rosa. Visitation will be Thursday, January 3, 2019 from 1:00-4:00 P.M. and Friday, January 4, 2019 from 1:00-4:00 P.M. at Chavez Funeral Home in Santa Rosa. All services have been entrusted to Chavez Funeral Home, 923 S. Third St., Santa Rosa, NM  88435.  575-472-3369 To place an on-line condolence, please visit www.chavezfuneralhome.com
To order memorial trees or send flowers to the family in memory of Soledad Chavez, please visit our flower store.