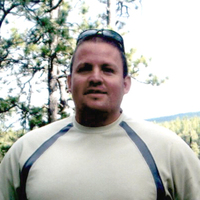 Steve Flores Stephen Nathaniel Flores was born in Albuquerque, NM, on July 5, 1969 to the home of Daniel and Lupita Flores. His family then moved to Santa Rosa, NM, where his dad became a school teacher. Steve attended Santa Rosa High School, graduating in 1988, and was an accomplished athlete in football, basketball and track. Steve graduated from Highlands University with a BA in Education, and later earned a Master’s degree in Education from North Carolina Central University in Durham, North Carolina. Steve was a fourth-generation teacher following in the footsteps of his great-grandfather, grandfather and father. He was a school teacher in West Las Vegas, NM and Durham, North Carolina and Albuquerque, NM. He had a combined 26 years as a teacher in his career. Throughout his life Steve loved to do anything in the outdoors especially hiking, biking, kayaking and canoeing. In his early adult years, Steve was a camp counselor at Camp Shaver in Jemez Springs, NM and worked at Fort Union Trading Post National Historic Site in Williston, North Dakota. He loved a good road trip! He made several cross-country road trips in the United States and visited numerous national parks along the way. Steve also loved watching any college or pro basketball, football, ice hockey or baseball game he could attend. Steve married Kristina Garnand in August 1995 in Albuquerque, New Mexico. He and Kristina have two beautiful children, Marcus age 18 and Hannah age 15. Steve lived in Durham, North Carolina with his wife Kristina from 1995 to 2005 where they both attended graduate school. Steve returned to New Mexico in 2005 with his family and lived in Albuquerque with his wife and children until his death. Among his many accomplishments, Steve wrote and published a well-loved book called “Ghost Town Basketball: Former High School Basketball Teams of New Mexico.” To write this book, Steve traveled across New Mexico to many small towns, including many ghost towns, and met many wonderful people along the way. To this day, people still express how much they cherish his book as a memory of the bygone days of small-town New Mexico High School basketball. Steve was a loving father, husband, son, and friend. He was so proud of his children Marcus and Hannah, always striving to teach them the values of family, responsibility, and hard work. Steve frequently showed his love to his family through lasagna! He was a champion lasagna maker and everyone looked forward to lasagna night. Steve worked with immense energy and always took time to come home to Santa Rosa to help his parents. He also helped his favorite aunts in Albuquerque, Berna and Consuelo. Consuelo’s son, Mayo, was like a little brother to Steve. Steve enjoyed keeping in touch with childhood friends and his dear friends, Brian, Steve, Adam, and Mike. Steve lived life to its fullest. He was always planning his next trip and his next big adventure. He was a wonderful historian and storyteller due, in part, to his uncanny memory, focus, and common sense. He could remember so many specific details of an event, the scores of basketball and football games, and the statistics about certain athletes that listening to him was so much fun. Steve didn’t have any regrets in life. He lived his life in the moment and led with a truly kind heart. He said what everyone else was thinking. His presence, his stories, his booming voice will be missed by so many who loved him. His survivors include his wife, Kristina Flores; son, Marcus Flores; daughter, Hannah Flores; parents Dan and Lupita Flores; older brother, Dan G. Flores; younger sister and spouse, Stephanie and Alex Boyd, and nephews Henry, Peter and Benedictus; brother-in law and spouse, Mark and Juanita Garnand, niece Candice and nephew, Justin (sp. Nichele), and nephew Angelo; brother-in-law, Daniel Garnand and nieces Mikayla, Krista and Addyson; and mother-in-law, Viola Garnand. He is also survived by his special pet dog, Russell. Steve returned to God on July 28, 2022. God is the only one who knows the big picture so on that fateful day he had Steve return to him! His passing is heartbreaking and painful for Steve’s family and friends but we find comfort in knowing that Steve is with his Maker for Eternity. We trust in God, above all, for His Honor and Glory. Mi hijito, divino tesoro, Ya te vas para no volver, Cuando quiero llorar no lloro, Y a veces lloro sin querer. Que En Paz Goce nuestro querido Steve! Visitation for family and friends will be Friday, August 5, 2022, from 1-6pm at Chavez Funeral Home in Santa Rosa. Recitation of The Most Holy Rosary followed by the Mass of Christian Burial will be Saturday, August 6, 2022 at 10am, at Saint Rose of Lima Catholic Church in Santa Rosa. Interment will follow at Saint Joseph Cemetery with Mayo Aragon, Brian Dwyer, Steve Dwyer, Kurt Flores, Daniel Garnand and Leo Sandoval serving as Pallbearers. Honorary Pallbearers: Michael Arrellin, Alex Boyd, Henry Boyd, Peter Boyd, Andrew Flores, Mark Garnand, Joey Montoya, Frank Madrid, Chris Mullins, Andrew Quintana, Joe Romero, Ted Saiz, Jim Sanchez, Paul Sanchez, Herbert Tenorio and James Vigil. Services are under the direction of Chavez Funeral Home, 923 S. Third St., Santa Rosa, NM 88435. 575-472-3369. To Place an online condolence or tribute, Please visit www.chavezfuneralhome.com.
To order memorial trees or send flowers to the family in memory of Steve Flores, please visit our flower store.