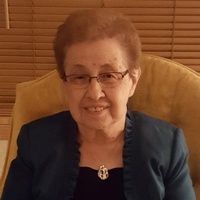 Mrs. Teresa "Terry" Gallegos, 87 of Santa Rosa, NM passed away Sunday, January 28, 2018 at Guadalupe County Hospital following an illness. She was born November 23, 1930 in Dahlia, NM to the home of Rodolfo and Marcelina (Sisneros) Sanchez. She attended grade school in Dahlia. The family moved to Santa Rosa and Terry attended grade school and graduated from Santa Rosa High in 1949. Terry married Antonio "Tony" Gallegos on August 20, 1955 at St. Rose of Lima Parish. They made their home in Santa Rosa where they raised their family.Terry was active in the parish where she served as a Eucharist Minister and was a member of the choir for many years. She served as president of the St. Rose of Lima Guild and was very instrumental in keeping the school going until it's closing in 1978. Terry's favorite "hobby" was spending time with her family, especially her grandchildren and great grandchildren.She was preceded in death by her parents, her husband Tony in 2009, brothers Benny Sanchez, Anselmo Sanchez, sisters Annie Casaus, Celia Pino, Pelagia Garcia, and Agnes Sanchez.She was a loving mother, grandmother, aunt and friends. Her survivors include three children, daughters Belinda Gallegos of Las Cruces, NM and Doris Houlihan and husband Dale of Santa Rosa, one son Mark Anthony Gallegos of Portales, also surviving is her sister Mary Ann Weide and  husband Dennis of Littleton, CO, three grandchildren Jennifer Houlihan of Las Cruces, Jason Houlihan and his wife Kelly of Albuquerque, and Joyce Wireman and her husband Thomas of Peyton, CO, six great-grandchildren Ava, Samantha, and Reilly Houlihan, Jonathan, Allison, and Ryan Wireman along with numerous nieces, nephews, other relatives and many friends.A rosary will be recited at 6:00 pm Tuesday, January 30, 2018 at St. Rose of Lima Catholic Church in Santa Rosa. Mass of Christian Burial will be celebrated from the Church at 10:00 am Wednesday, January 31, 2018 with Father Christopher Bernabe officiating. Burial will follow at St. Joseph Cemetery. Pallbearers will include Lee Vega, Tommy Sanchez, Max Pino, Rudy Sanchez, Bennie Sanchez, and Herman Flores. Honorary bearers will include Arnold Gallegos, Greg Gallegos, Glenn Gonzales, John Perea, and Leroy Gallegos.All arrangements are under the direction of Chavez Funeral Home, 923 S. Third Street, Santa Rosa, New Mexico. (575) 355-2311.
To order memorial trees or send flowers to the family in memory of Terry S. Gallegos, please visit our flower store.