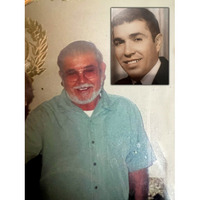 Theodore C. Sena, 89 of Clovis, NM passed away Friday evening, November 18, 2022 following an illness. He was born April 14, 1933 in Fort Sumner, NM to the home of Theodoro and Gertrude Casaus Sena. Theodore grew up in Fort Sumner and attended Fort Sumner Schools. He married Rose Aragon on October 25, 1952 in Fort Sumner. Theodore worked for Ray Jax Meat Processing in Fort Sumner as a meat cutter. He moved his family to Roswell where he worked for Glovers Meat Cutter as a supervisor for 17 years. He later worked in the meat department for Piggly Wiggly in Roswell. He later moved to Cactus, Texas where he worked as a ranchhand for the Mays family for two years before joining the Swift Meat Plant where he worked for 4 years. In 1983 Theodore and Rose made their home in Clovis. Theodore worked for Ranchers Choice and later for Standell's Meat where he worked for 14 years until his retirement in 2009. Theodore was a member of Our Lady of Guadalupe Catholic Church in Clovis. According to his family he was a talented carpenter, enjoyed mechanic work and teaching his grandkids to repair autos. He also spent many hours maintaining an immaculate yard. He is preceded in death by his parents, a son Theodore Sena III, two sisters Celia Garza, Agneda Garcia, three brothers Mariano Sena, Benny Sena, and Robert Sena, and his son in law Curtis Page. Survivors include his wife of 70 years, Rose Sena of the home in Clovis, three daughters Lucille Page of Clovis, Patricia Trujillo (Mike) of Clovis, Stephanie Estrada (Joe) of Roswell, two sons David Sena of Clovis, and Michael Sena (Tina) of Clovis. Also surviving are his siblings, a sister Terry Garza of Los Lunas, NM and Blas Sena of Melrose, NM, 19 grandchildren, 59 great-grandchildren, 24 great-greatgrandchildren, along with many nieces, nephews, other relatives and a host of friends. The family would like to thank their good friends and neighbors Mario and Rebecca Barela and family, the Staff of Plains Regional Medical Center for their excellent care, and the staff at Gentiva Hospice. Cremation has taken place. A memorial graveside service will be held at 11:00 am Tuesday, November 22, 2022 at St. Anthony Catholic Cemetery in Fort Sumner, New Mexico. Honorary bearers will be all family and friends of Theodore Sena. Arrangements are under the direction of Chavez Funeral Home, 830 N. Fifth Street, Fort Sumner, New Mexico. (575) 355-2311.
To order memorial trees or send flowers to the family in memory of Theodore C. Sena Jr., please visit our flower store.