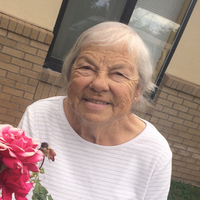 Velma Lorene Lynch, 77 of Santa Rosa, passed away at The Suites, Rio Vista Rehabilitation Center in Rio Rancho, NM on Saturday, September 07, 2019. Velma was born on February 09, 1942 to the home of Lloyd and Velma (Treat) Still in Leslie, Arkansas.  She was reared in Leslie and attended school there as well. Velma married Jack Lynch on September 15, 1978 in Clovis, NM.  She and her husband Jack moved to Santa Rosa in August of 1992.  Velma was an LPN at Guadalupe County Hospital for seven years and also worked at Los Amigos Nursing Home for another two years.  She was also a member of the First Baptist Church in Santa Rosa. Velma was a simple person who enjoyed the little things in life.  She was a devout Christian who loved our Lord and appreciated His creations.  She found great joy in nature appreciating flowers and birds.  Velma was a kind, sweet, loving individual who made friends easily and will be remembered with fondness. Velma is preceded in death by her parents, her husband; Jack Lynch in 2010, brother; Willard Still, sister; Sharon Still and a niece; Patty. Velma is survived by three sons; Billy Lynch and wife Susan, along with granddaughter; Mariah Lynch who was very special to Velma as she was her constant companion, and grandsons; Jose and Miguel, all of Santa Rosa, Oran Carroll, Jr. and wife Carma of McQueeney, TX, William Carroll and wife Dianne of Throckmorton, TX , Lloyd Edward Still and wife Linda of Aurora, CO, Larry Still and wife Patty of Casper, WY, sister; Norma Caltrider and husband Ted of Clinton, AR, and step-daughter; Jaci Chadick and husband Rick of Amarillo, TX.  She is also survived by numerous grandchildren, great-grandchildren, family and friends. Visitation is scheduled for September 11 and 12, 2019 from 1-6 PM at Chavez Funeral Home in Santa Rosa.  A graveside service will be Friday, September 13, 2019 at 4:00 PM at Evergreen Cemetery in Santa Rosa. Serving as Pallbearers are; William Carroll, Oran Carroll, Jr., Rick Chadick, Estevan Hernandez, Pat Swaggart, Pete Ulibarri, John Paiz and Lorenzo Lucero.  Honorary Pallbearers will be; Lloyd Still, Larry Still, Ben Rael, Jose Gallegos and Miguel Gallegos. All services have been entrusted to Chavez Funeral Home, 923 S. Third St., Santa Rosa, NM  88435.  575-472-3369.  To place on on-line tribute please visit www.chavezfuneralhome.com.
To order memorial trees or send flowers to the family in memory of Velma L Lynch, please visit our flower store.