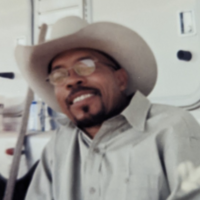 A true cowboy, Vernon Lee Hines passed away on Monday, May 2, 2022 in Tucumcari NM. Vernon Lee was born on March 12, 1951 to Vernon and Birdie Mable Hines. Vernon Lee graduated from Tucumcari High School in 1970 where he ran track and played football. He received an athletic scholarship to play football at Eastern New Mexico University. He later went on to serve his country in the Army and was stationed at Fort Knox Army base in Kentucky. After being honorably discharged in 1975, Vernon Lee returned to New Mexico with his family and resided in Albuquerque where he made many life-long friends through sports, the rodeo circuit, and work. While in Albuquerque, he worked in construction, ranching, and with Star Paving Company. One of Vernon Lee’s greatest loves were his horses. He enjoyed traveling with them and riding in rodeos with his brother James in team roping events as the header. A thrill seeker, Vernon Lee was drawn to horses that were prone to bucking and a little on the “crazy” side. He had a natural ability to break them to his liking and he was called on by many to assist in breaking unmanageable horses because of this skill. Vernon Lee was a skilled man in many areas and enjoyed many life experiences which included football, becoming an undisputed grill master and inventive home cook in his own right. One could say he was a skilled domino player. However, many would say “he sure could cheat” to win. He was a man of musical talent, able to play any instrument he picked up in his younger years without any training. He also had an amazing voice that could contend with the best of them. His vocal range was unlimited which he displayed in a group formed in high school called the “Soul Spirits”. He also graced many with his voice during special occasions, gatherings, or anytime he just felt like singing. Vernon Lee loved ranching and spending time on the land he grew up on in Tucumcari, where he created many lifelong memories with his family and friends. For Vernon Lee life on the ranch consisted of rounding up and branding cattle, teaching others how to ride and about life on the ranch, family gatherings, barbeques, hunting, good whiskey, horseshoes, and a good game of dominos. Vernon Lee will be remembered as a man who lived his life on his terms. His infectious smile and sinister laugh will forever shine and ring through in the hearts of those who loved him. He was a man with great wit and a big sense of humor. He loved to laugh and to keep people laughing. His heart for people and his horses will be remembered most. He will be missed. Vernon Lee was preceded in death by his father Vernon Hines, his mother Birdie Mable Hines, his brother Walter Hines, and grandson Gregory James, Jr. Vernon Lee leaves behind his children Nina Salmon and son-in-law Daniel Salmon of Las Cruces, Venesa Hines-Williams and son-in-law Brandon Williams of San Antonio, TX, Vernon Andre Hines and daughter-in-law Ashley Hines of Artesia, and son Gregory James, Sr. of Louisville, KY; Grandchildren Brittany, Brandon, and Brooke Salmon, Olivia, Isaiah, and Marcus Hines, Kelbee (Darrell)Johnson, Jailyn Williams, Lyric Hines, Adonis Andre Hines (June 2022), Whitney, Tylen, and Gionni James, and 14 great-grandchildren. Vernon Lee is also survived by his siblings James Hines, Bobby Jo Hines, Merine (Marcus) McCoy and brother at heart Anthony Kent. Other special people in his life include his nephews Truett (Merine), Joshua and Cameron (James), Iseha (Bobby), nieces Ebony, Meghan, and Shawntea (Merine), longtime companion Christine McCaughtry, and a host of friends that he considered family. Vernon Lee’s children would like to express their heartfelt gratitude to Chavez Funeral Home, Star Paving Company, and The Father’s Forge for their role, their kindness, love, and support during this time. Cremation has taken place, a memorial service will be held at 10:00 am Tuesday, May 17, 2022 at The Father’s Forge, 622 S. Lake Street, Tucumcari, NM with Pastor Eddy Nardis officiating. Interment with military honors will follow at Tucumcari Memorial Park Cemetery. Pallbearers will be Andre Hines, Gregory James, Isaiah Hines, Marcus Hines, Brandon Salmon. Honorary pallbearers will be James Hines, Bobby Hines, Anthony Bam-Bam Kent, Marcus McCoy, Joshua Hines, Truett Thomas, Cameron Hines, Iseha Conklin. The Hines family requests that everyone wear a mask/face covering to respect the vulnerable attending the services. Arrangements are under the direction of Chavez Funeral Home, Fort Sumner, NM. (575) 355-7557. To place an online tribute or sign the guest book, go to www.chavezfuneralhome.com .
To order memorial trees or send flowers to the family in memory of Vernon Lee Hines, please visit our flower store.