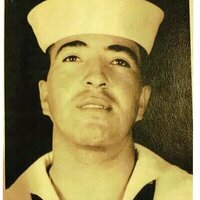 Victor Chavez, 87 of Santa Rosa, NM passed away peacefully at Vecinos Sanos Assisted Living in Santa Rosa, NM on May 12, 2021. Victor was born on January 8, 1934 in Santa Rosa to Manuel Chavez, Sr. and Rosa (Zamora) Chavez. Victor was raised in Santa Rosa, where he also attended school. Victor served his country in the Navy, receiving an Honorable Discharge. Following his service in the Navy, Victor returned to Santa Rosa and married the late Sarah Flores on May 25, 1973. Victor was a building contractor and was engaged in the stock business as a rancher. Victor was a parishioner at Saint Rose of Lima Catholic Church and he also enjoyed the outdoors, hunting and fishing. He also found great joy working on his ranch. Victor is preceded in death by his parents, his wife; Sarah, sisters; Antonia Ortega and Mary Sanchez and brothers; Manuel Chavez, Jr., Teofilo Chavez, Juan Chavez and Eloy Chavez. Victor is survived by his nephews; Robert Chavez (Martha) of Santa Rosa, Ernest Chavez (Grace) of Santa Rosa, as well as numerous nephews, nieces, family and friends. Visitation will be Friday, May 14, 2021 from 1PM to 6PM at Chavez Funeral Home, 923 S. Third St., Santa Rosa, NM. Recitation of the Most Holy Rosary will be Saturday, May 15, 2021 at 10:30AM at Saint Rose of Lima Catholic Church followed by the Mass of Christian Burial, with Father Christopher Bernabe officiating. Interment will follow at Saint Joseph Cemetery with Gilbert Chavez, Dominic Chavez, Leroy Campos, Erminio Chavez, George Ortega and Herman Martinez serving as Pallbearers. Honorary Pallbearers will be; Sec Rivera, Leroy Apodaca and Victor’s many friends. All services are under the direction of Chavez Funeral Home, 923 S. Third St., Santa Rosa, NM 88435. 575-472-3369. To place a tribute or online condolence, please visit www.chavezfuneralhome.com.
To order memorial trees or send flowers to the family in memory of Victor Chavez, please visit our flower store.