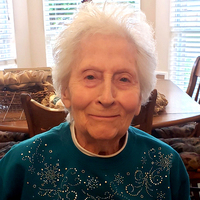 Vida Imogene Pruitt, age 94, passed away 15 April, 2020 in Lubbock, Texas. Vida was born on February 13, 1926 in Sulfur Springs, Texas to William McKinley and Eula Fay (Underwood) Franks. The family moved to Borger, Texas when Vida was two years old where her father worked in the oil fields. The family moved around the Texas panhandle in her youth, and Vida attended schools in Pampa and Skellytown before her graduation at White Deer High School in 1944. The Frank’s family moved to Fort Sumner, New Mexico shortly after Vida’s graduation. Here they established “Frank’s Country Store” a very successful grocery business. Vida met her future husband, Jimmy Pruitt, in Fort Sumner. He was in the Army Air Corp and had been stationed at the Fort Sumner Army Airfield. Jim was a flying cadet training in advanced twin engine aircraft. Vida and Ewell James Pruitt were married on 26 June 1946 in Fort Sumner. They newlyweds were transferred to Victorville Army Airbase, California shortly afterwards. To make ends meet, Vida worked in a factory packing parachutes. She also installed ailerons on airplane wings during this time. These were the movable flaps used to control the airplane’s rolling and banking movements. After Jimmy was honorably discharged from the military, he and Vida moved to Hobbs, New Mexico where Jimmy worked in the oil fields. They also lived and worked around Artesia and Maljamar during this time. Unfortunately, Jimmy was severely burned in an oil field explosion. Not wanting to go back into the oil fields after his recovery, he began training as a meat cutter. He was employed by Safeway and Furr’s super markets in Hobbs. Later, he and Vida moved to Fort Sumner to work in the family grocery business where Jimmy worked in the meat department. Vida also worked at the store as a cashier for a short time. Jimmy and Vida gave birth to their first son, Jerry Douglas Pruitt, in 1948 followed by Norman Lee Pruitt in 1953. Both were born in Fort Sumner. The family moved to Clovis, New Mexico in 1967 before moving back to Fort Sumner in 1969. Vida ran for De Baca County Clerk in 1970. She won the election and proudly served as either County Clerk or Deputy County Clerk for the next 23 years until her retirement in 1993. She lived in Fort Sumner until moving to Lubbock, Texas in 2005 where she lived until she passed away. Vida enjoyed playing bridge, bowling, golf, gardening, crocheting, and traveling. She was able to visit Okinawa, Japan, Hong Kong, Germany, Hawaii, and Alaska among other places. She also enjoyed doing jigsaw puzzles, crossword puzzles, and word searches. Vida was preceded in death by Ewell James Pruitt, her husband of 50 years. Also preceding her in death were her parents William McKinley and Eula Fay (Underwood) Franks, and an older brother William (Bill) Romalice Franks. Those left to cherish her memory are her two sons; Jerry and wife Patti Pruitt of Lubbock, Texas, and Norman and wife Laura Pruitt of Las Cruces, New Mexico; Also brother Donald Franks and wife Bobbie of Fort Sumner, New Mexico, and sister Adie Achen and husband Tyson of Las Cruces, New Mexico. She is also survived by four sisters-in-law Charlene Franks, of Fort Sumner, New Mexico, Wanda Wilson of Gore, Oklahoma, Doris Pruitt of Checotah, Oklahoma and Betty Pruitt of Checotah, Oklahoma. She is survived by four grandchildren; Sean Douglas Pruitt of Houston, Texas; Brian Timothy Pruitt of Lubbock, Texas; Ethan James Pruitt and wife Shuko of Okinawa, Japan; Jason Paul Pruitt and wife Stacey, of San Antonio, Texas; nine great-grandchildren, Sean Douglas Pruitt and wife Bonny from Schwandorf, Germany; Cindy Marie Pruitt of Schwandorf, Germany; Bethany Nicole Pruitt of Lubbock, Texas; Bryton Chance Pruitt and Brooklynn Reese of Amarillo, Texas; Leah June Pruitt and Ryan James Pruitt of Okinawa, Japan; and Dylan Carter Pruitt and Avalyn Grace Pruitt of San Antonio, Texas; and a great-great grandson Damon Douglas Pruitt of Schwandorf, Germany. She is also survived by a number of other relatives and friends. In lieu of flowers, donations in loving memory of Vida Pruitt can be made to the Fort Sumner Cemetery Association P.O. Box 180, Fort Sumner, NM 88119 or Saints Jude Children’s Research Hospital, P.O. Box 50, Memphis, Tenn. 38101-9929. Visitation for her friends will be on Friday, April 17, 2020 from 1pm to 6pm at the funeral home. A family graveside service was held at 2:00 pm, Saturday, April 18, 2020 at Fort Sumner Cemetery with Vida's son, Evangelist Jerry Pruitt officiating. Due to the statewide restrictions pertaining to the COVID-19 Pandemic, the graveside services were limited to the immediate family only. Please continue to keep the Pruitt and Franks families in your prayers. You may sign our online guestbook or enter a tribute or favorite memory to share with the family. www.chavezfuneralhome.com Arrangements are under the direction of Chavez Funeral Home, 830 N. Fifth Street, Fort Sumner, New Mexico. (575) 355-2311.
To order memorial trees or send flowers to the family in memory of Vida Pruitt, please visit our flower store.