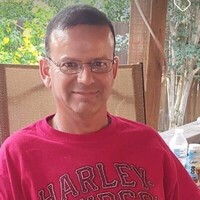 Vincent Rodriguez, 57 of Fort Sumner, NM passed away Sunday evening, October 31, 2021 at Plains Regional Medical Center following an extended illness. He was born August 29, 1964 in Littlefield, Texas. Vincent grew up in Sabinal, TX until the age of 16 when the family moved to Fort Sumner. Vincent attended Fort Sumner High School and graduated with the class of 1983. While in high school, Vincent worked for George Gonzales at the Pueblo Conoco. He continued his education at Eastern New Mexico University where he received his Bachelor Degree in Criminal Justice. After college, he enlisted in the U.S. Air Force where he served for 7 years as an Aircraft Armament Systems Specialist and Weapons Maintenance Technician. Following his honorable discharge in 1990 Vincent returned to Fort Sumner and worked as a Bartender and Cook at Fred's Restaurant. Vincent worked for the NM Department of Transportation in the administration office, he later worked for HDR in their business office. Vincent married Erma Gonzales on November 6, 1991 in Sabinal, Texas. They made their home in Fort Sumner. Vincent served for 20 years in law enforcement with the De Baca County Sheriff Department. During this time he was appointed to complete one term as De Baca County Sheriff. Vincent also worked for the Brlington Northern Santa Fe Railway as a Conductor for 13 years. Vincent volunteered with the Fort Sumner Valley Fire Department where he served a Fire Chief for several years. He also volunteered as a driver for Fort Sumner Emergency Medical Services. He served one term on the Fort Sumner School Board. He was a member of American Legion Post #21 in Clovis and a member of the Legion Riders motorcycle group. His hobbies and interests included welding crafts with horse shoes, fishing, and hunting. He loved to stay busy. Vincent is preceded in death by his father Manuel Jesus Rodriguez in 2008, a brother Billy Rodriguez in 2014, and his maternal grandmother Lauteria L. Pacheco in 2010. Survivors include his wife Erma Rodriguez of the family home in Fort Sumner, two children, a son Vincent Rodriguez II of Albuquerque, and a daughter and son-in-law Alexandra and Ben Evert of Lubbock, Texas, his mother Mary Madrid and her husband Alex of Fort Sumner, his siblings sisters Christy Drake and husband Brian of LaLande, NM, and Regina Gonzales and husband Nick of San Antonio, brothers Andrew Harris and wife Charity of San Antonio, TX, Johnny Rodriguez of Eutopia, TX and a sister Jessica Harris of Marble Falls, TX, along with a host of other family and many friends. (The Rodriguez family requests that all those attending the services please wear a face mask). Holy Rosary followed by the funeral Mass will be held at 10:00 am Saturday, November 6, 2021 at St. Anthony Catholic Church in Fort Sumner with Father Christopher Bernabe and Father Sotero Sena officiating. Interment with Military Honors will follow at Fort Sumner Cemetery. Arrangements are under the direction of Chavez Funeral Home, 830 N. Fifth Street, Fort Sumner, New Mexico. (575) 355-2311.
To order memorial trees or send flowers to the family in memory of Vincent Rodriguez, please visit our flower store.