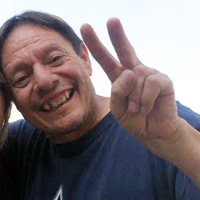 Vincent “Eddie” Sandoval, 54 of Tucumcari, NM passed away Monday, October 25, 2021 at his home following an illness. Edward was born December 23, 1966 in Tucumcari, NM to the home of Vicente and Mary Julia (Griego) Sandoval. He attended Tucumcari Public Schools and graduated from Tucumcari High School in 1985. Vincent worked for Tucumcari Public Schools, St. Anne's Catholic Church, K-Mart, ALCO, and did other odd-in jobs. Most importantly he loved helping his "Pops" yardwork throughout the community and taking care of him. Vincent is preceded in death by his parents, a sister Geraldine Baca, and a daughter Amanda Sandoval. Survivors include a daughter Jacqueline Knogg of Amarillo, TX, two grandchildren, three brothers Ronnie Sandoval (Rosie) of Belton, Missouri, Alex Sandoval (Mary) of Tucumcari, and Raymond Sandoval of Tucumcari. Holy Rosary will be recited at 9:30am followed by the funeral Mass on Saturday, November 6, 2021 at St. Anne’s Catholic Church in Tucumcari. Interment of cremains will follow in the family plot at Tucumcari Memorial Park Cemetery. Arrangements are under the direction of Chavez Funeral Home, 830 N. Fifth Street, Fort Sumner, New Mexico. (575) 355-2311.
To order memorial trees or send flowers to the family in memory of Eddie Sandoval, please visit our flower store.