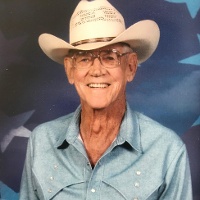 Walter Roy Meacham, 86 of Fort Sumner, NM passed away Friday, June 7, 2019 at the Amarillo V.A. Medical Center following an illness.  Visitation hours will be held on Sunday, June 16, 2019 from 1pm to 6pm. Walter's family will receive friends at the funeral home from 2pm to 4pm. Interment with military honors by Kirtland Air Force Base Honor Guard will be held at 9:45 am Monday, June 17, 2019 at the Santa Fe National Cemetery in Santa Fe, New Mexico. Walter Roy Meacham was born October 22, 1932 in White Face, Texas to the home of Thomas Virgil and Laverne (Chron) Meacham. He grew up in Plainview and White Face, Texas and later Portales, NM. Walter served in Korea in the U.S. Air Force, he was honorably discharged on January 26, 1953. He worked for many years as a self employed truck driver. He bought his first truck in 1956. Walter made his home in Fort Sumner in 1976 and bought his farm in the Fort Sumner valley in 1972. He was a member of Calvary Baptist Church in Portales, NM. Walter is preceded in death by his parents, a step-son Wayne Jones in 1995, and a brother Thomas V. Meacham Jr. Survivors include a daughter Brenda Gail Simon and her husband Tim of Brighton, Colorado, two grandchildren Tiffany and Charlie and one great-grand daughter Jayden. All arrangements are under the direction of Chavez Funeral Home, 830 N. Fifth Street, Fort Sumner, New Mexico. (575) 355-2311.
To order memorial trees or send flowers to the family in memory of Walter Roy Meacham, please visit our flower store.