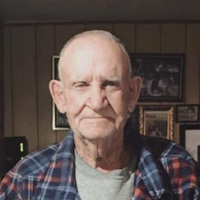 William “Bill” Capps was born in Cuervo, NM on November 11th, 1932 to Lottie Yates and Arthur Capps. Bill was born after his brothers Roy Elmer and James and followed by three more brothers and two sisters: Floyd, Opal, Ronnie, Faye, and Richard. Bill served in the Marines from 1/16/52 to 1/15/1955 with most of them being stationed in Korea and he was a member of the VFW Post 25 in Santa Rosa. He took pride in knowing how to do many things and working hard. Those traits coupled with the inability to stay idle led to a wide variety of jobs including driving for Coca-Cola, helping build the dam in Santa Rosa, owning the Rio Pecos, as well as having cattle for many decades. He retired from the City of Santa Rosa after 25 years of dedication, then went on to work for ENMRSH for several years, “to keep busy.” He truly was a Jack of all Trades. Bill loved his family beyond measure. So much so that he wanted to make sure he had plenty of them! While stationed in San Diego he met his first wife, Barbara. Together they had Kathy and the late Susan. Susan had a son and daughter, and between them, there are 3 great-grandsons. He later wed Joan who brought Johnny and Pam into the family, and then together they welcomed Roger into the world. Pam’s son and daughter added 4 great-granddaughters and a great-grandson. Roger’s 4 sons and daughter have also brought a great-granddaughter into the fold. When Bill married Nelda he lovingly embraced Freda, Jay, Sperlan, and the late Shannon. Freda’s 2 sons and 2 daughters brought 6 great-grandsons and 3 great-granddaughters. Jay’s daughter gave Bill 2 great-grandsons and a great-grand daughter and Sperlan's 3 sons and daughter brought 2 great-grandsons and 3 great-grand daughters into the family. His heart held no limits on the amount of love it gave and that showed with all of the honorary kids, grandkids, and great-grandkids he “adopted” over nearly 90 years on this earth. Anytime you spoke with Bill the pride he had for those he loved was undeniable. He was always bragging about someone or telling you how proud of you he was. Bill enjoyed sharing his knowledge and many interests with those around him. Every morning started at the Sun n Sands where he relished in giving his friends a hard time over coffee. He loved God immensely and it showed in so many ways. If he wasn’t in church hearing the Gospel, he was teaching Sunday school. Bill could often be found on the sideline of some sporting event cheering on his family. If he wasn’t in the stands, it’s because he was coaching or umping. Bill also taught hunters safety classes for 20 years. A great word to describe Bill is “involved.” He was always seeking ways to be an asset to those around him. It didn’t matter if it helped 1 person or many; if you were blood family or chosen; friends or strangers, everyone was a recipient of his generosity, love, kindness, a nickname, and even some orneriness. In a lot of ways Bill lived a very simple life, but it was so incredibly full and he will be deeply missed. His family asks that you keep Bill’s spirit alive by telling stories about him, do something kind for someone else, always tell those you love how much they mean to, as well as boast about them to others. Services for Bill will be Thursday, August 18, 2022 at 10am at The First Baptist Church in Santa Rosa, with Ethan Fuchs officiating. Interment will follow at the Cuervo Cemetery in Cuervo, NM in the family plot, with Rick Sawyers, Marshall Patterson, Ethan Patterson, Shannon Ray, Kenny Bradley, Kadyn Patterson, Timothy Capps, Leroy Lucero and Roger Capps serving as Pallbearers. A meal for family and friends will be served at The Blue Hole Convention Center following the service, with meat provided. Services are under the direction of Chavez Funeral Home, 923 S. Third St., Santa Rosa, NM 88435. 575-472-3369. To place an online condolence or tribute, please visit www.chavezfuneralhome.com.
To order memorial trees or send flowers to the family in memory of William "Bill" Capps, please visit our flower store.